The idea for some kind of body that could look into the welfare, religious guidance and problems faced by new converts to Islam was conceived in the early ‘70s. In 1973, “Kumpulan Saudara Baru” or “The New Brothers Group” was formed with the objective of having a place where the new Muslim converts could get together and develop the fraternal, religious and social relationships among themselves.

The group operated out of a modest waqaf (to give in the line of Islam and its propagation) house at 24, Pheng Geck Avenue, which was administered and rented out by the Islamic Religious Council of Singapore or MUIS. The house was named “Rumah Saudara Baru” or the “Muslim Converts’ Home” and was officially opened by the then President of MUIS, Hj. Buang Siraj on 27 November 1977.

In 1979, under the leadership of Bro. Ridzuan Wu, the group decided to apply for the official registration of the Association with the Registry of Societies. This led to the official formation of “Muslim Converts’ Association of Singapore” (MCAS).

The following year, in 1980, the Association was also known as “Darul Arqam”, a name given by the Mufti of Singapore, Syed Isa Semait, to be synonymous with Muslim Converts’ Association of Singapore. “Darul Arqam” is Arabic for “House of Arqam”. “Arqam” or Aboo Abdullah Arqam bin Abi al-Arqam, was an early convert to Islam during the first three years of Prophet Muhammad’s (saw) prophethood in Makkah. He had allowed for his house to be used for the learning and propagation of Islam.

The name of “Darul Arqam” thus, seems appropriate for the newly-formed Muslim Converts’ Association of Singapore.

After several years, MCAS expanded by taking another house along Pheng Geck Avenue. The unit at No. 17, Pheng Geck Avenue was used as a hostel for women, a library and a classroom. At that time MCAS had a Mobile Islamic Information Service, a van stocked with books, which went to different mosques each week to disseminate information on Islam in English. The association even had book kiosks targeted at tourists at historical mosques such as the Sultan Mosque and Hajjah Fatimah Mosque.

However, the intention to have a building to call their own was never far from the minds of the dedicated people in the Association. In 1982, with the support of countless volunteers and well-wishers, the Association raised funds to purchase a small piece of land at Changi Road in order to build an Islamic Centre.

Meanwhile in 1989, the Association rented a 3-storey building at No. 15, Lorong 15, Geylang, which became its Headquarters. It gave up No. 17, Pheng Geck Avenue and used 24, Pheng Geck Avenue as the publications office and for children’s classes. At around the same time, MCAS opened a bookshop at Jalan Merah Saga at Holland Village. The premises known as Darul Arqam West also catered to the educational needs of members in the vicinity.

In 1995, MCAS once again had to move its headquarters, this time to the third level of an old primary school at Broadrick Road, upon the death of the owner of No. 15, Lorong 15, Geylang.

In the same year, the Association decided that the land at Changi Road be sold and a building acquired. The following year in 1996, the Association bought a 3-storey building called The Galaxy at 32 Onan Road, from the sales proceeds. This was to be its new headquarters, where finally, the whole of MCAS came under one roof.

Under One Roof – The Galaxy

On 2 June 1997, The Galaxy – the building of the Muslim Converts’ Association of Singapore; the “House of Arqam” – was officially opened by Guest-of-Honour, Mr Sidek Saniff, then Singapore’s Minister of State for Environment.

2015, mark the Association’s 35th anniversary. The Galaxy has undergone quite a drastic refurbishment to cater growing needs of our members to learn Islam. We are now having 6 classrooms, 2 small prayer practical rooms, 1 auditorium, and many other facilities that catered for that need. 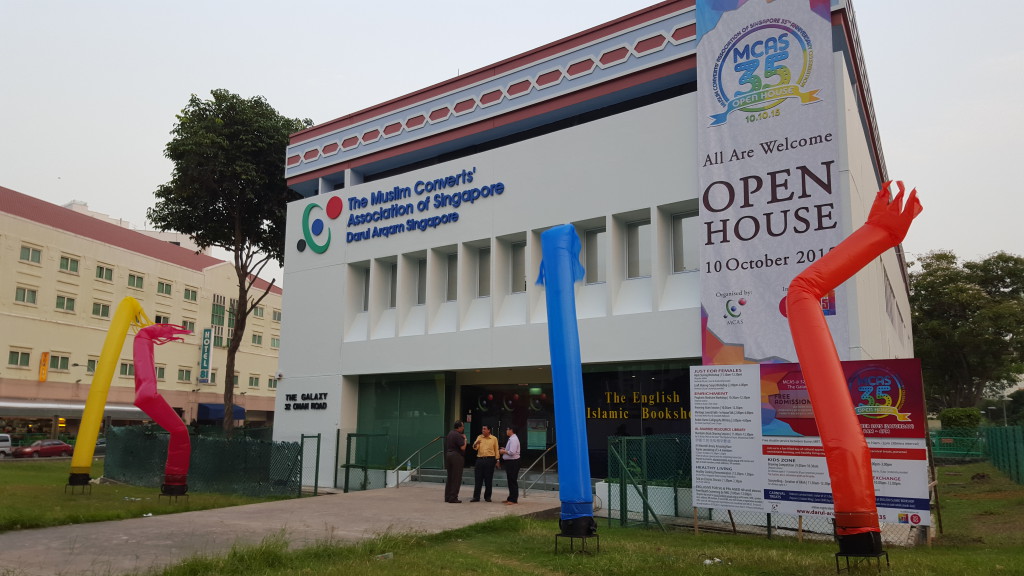 Registration Closed! Thank you for your interest in DATP 2022. Our Next Registration will be in January 2023.