Before embracing Islam, the Association recommends the convert to be to attend the following Foundation classes;

Completion of the Foundation Courses (i.e. KIS, BCI and Let’s Pray 1) are highly encouraged for a fuller understanding of Islam and the practices of a Muslim.

To understand more about Islam, check out our free publications here .

Upon conversion, the convert will be issued with the Conversion Card and a post conversion starter set Items includes a Quran with English translations, prayer compass, prayer mat, prayer garment (for ladies) and a prayer cap (for men).

Once you are ready to embrace Islam, please submit your appointment request by clicking an available date time slot below

Within 5 working days after a conversion appointment is booked,
An officer will call and follow up with an email with the link for the above submission.

During the conversion ceremony, you need to recite the Shahadah (Declaration of Faith) in the presence of the Registration officer and the two male Muslim witnesses. You need to express it clearly with conviction, and to internalise the meaning of the Shahadah.

Ideally the convert-to-be would have undergone the Knowing Islam Session (KIS), Beginner’s Course in Islam (BCI) & Solat (prayer) Tutorial (ST). It is designed to provide the opportunity for one to understand & appreciate Islam prior to becoming a Muslim.


** The officer will follow up with an email to provide the link for the above submission.

Upon conversion, you will be issued with the Conversion Card and a gift set which includes a translation of the Quran, prayer compass, prayer mat, prayer garment (for sisters) and a prayer cap (for brothers). If you are ready to embrace Islam, you may book an appointment for the Conversion Ceremony with the Converts’ Development Division (CDD).

Do I need a Muslim name?

A list of Muslim names is available at CDD office upon request. You can also purchase a book on Muslim names at our Bookshop. You may choose your name in any of the following formats shown:

For Singaporeans, the format of the name that you have chosen can be inserted in your Identity Card (NRIC). Do note however, that your current name remains while the Muslim name is an alias.

This is a sample of the Conversion Card and how your full name and the chosen Muslim name will be displayed: 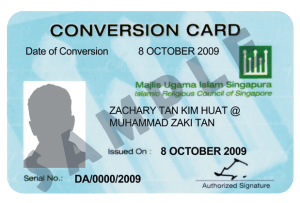 Why must a non-Muslim embrace Islam when marrying a Muslim?

To Muslims, religion is a serious matter, not one that can be taken lightly or for granted. This is so because one is answerable for one’s behaviour and actions to God in the Hereafter.

It is a law in Islam that for a Muslim marriage to be legal, the two parties intending marriage must be Muslims. A kadhi (the official who solemnises a Muslim marriage) will not carry out his duties if one of the parties is not a Muslim.

Practising Muslims fear God in the sense that they respect Him, and would not disobey the teachings of Islam.

A Muslim marriage, which is a long term affair and which will affect the religious inclination of the children, is a sacred social contract. A Muslim who wishes to be legally married in Islam, will therefore insist that the non-Muslim person he/she intends to take as a spouse, converts to Islam before they register for the marriage ceremony.

Islam is the extension and completion of all the revealed teachings of God, one that teaches its followers to have a firm belief in the one God and to practise righteousness for their well-being both for this world and the Hereafter. A Muslim is a follower of this perfected or ultimate religion. In Islamic concept, a non-Muslim of whatever religion is likened to a person at various stages of ascension on the ladder of religious progress with the Muslim being at the top. A conversion (to Islam) is therefore insisted upon to make him or her attain the same level of belief as that of the Muslim party – the highest level of belief in the Oneness of God and ‘Surrender to God’.

A non-insistence to conversion (to Islam) is likened to a selfish and wicked attitude, even sinful, on the part of the Muslim party for not helping a new relation to enter Islam for the sake of his or her own soul.

The circumcision (khitan or khatnah) is the Sunnah of Prophet Ibrahim and Prophet Muhammad (peace be upon them and upon all the prophets and messengers of Allah). Prophet Muhammad (SAW) said, “There are five things that are of the nature (i.e. of the natural hygiene): removing the pubic hair, circumcision, trimming the mustache, removing the underarm hair, and cutting of the nails.” (Reported in all the six authentic collections of Hadith and other books of Hadith).

According to Imam Abu Hanifah and Imam Malik, circumcision is highly recommended (sunnah mu’akkadah). According to Imam Shafi’i and Ahmad ibn Hanbal it is mandatory (wajib). Muslim parents should make sure that their male children are circumcised. It is good for their cleanliness (taharah) as well as it is a prophetic tradition.

Circumcision enables one to easily clean his private part. The penis’ foreskin usually will gather some urine in its sac. Thus, if one has embraced Islam, and has not undergone circumcision, he must ensure that his penis is clean before performing any prayers, by pulling back the foreskin. Circumcision nowadays is a fast and almost painless affair. The initial injection of anaesthesia is the only pain that one will feel. If he goes through laser surgery, the healing will be very fast, less than a week.

Reimbursement of up to SGD$300 can be claimed from the Finance Division on the second floor of the Association. Please produce your Conversion Card and receipts when making the claim.

Registration Closed! Thank you for your interest in DATP 2022. Our Next Registration will be in January 2023.